Swagger is a simple yet powerful representation of your RESTful API. With the largest ecosystem of API tooling on the planet, thousands of developers are supporting Swagger in almost every modern programming language and deployment environment. With a Swagger-enabled API, you get interactive documentation, client SDK generation and discoverability.

Swagger is very powerful framework that is able to generate schema and rich UI for your RESTful API. As I know, Swagger is very popular framework especially in the non-.NET world. You probably have already seen Swagger UI (like this) at several resources.

It turns out that it is not hard to use Swagger for .NET F# apps. There is a project called Swashbuckle, which adds Swagger to WebApi projects.

First of all, you need to create F# ASP.NET Web API project. You can do it using “F# Web Application templates (MVC 5 and Web API 2.2) by Ryan Riley and Daniel Mohl“. Choose “Web API 2.2 and Katana 3.0” option in project creation wizard.

So, now you have F# Web App with RESTful API: CarsController with two services ‘/api/cars‘ and ‘/api/car/{id}‘. Everything is awesome but we do not have UI that is able to show a list of available services, their parameters and return types. Swashbuckle will help us here, we need to install ‘Swashbuckle.Core‘ package to our web app.

The last step is to update HttpConfiguration in Startup.fs in proper way to register Swagger. Add following three lines to the end of RegisterWebApi method.

That’s all! When you start your web application and open ‘/swagger/ui/index‘ URI you will see beautiful documentation for your RESTful API. 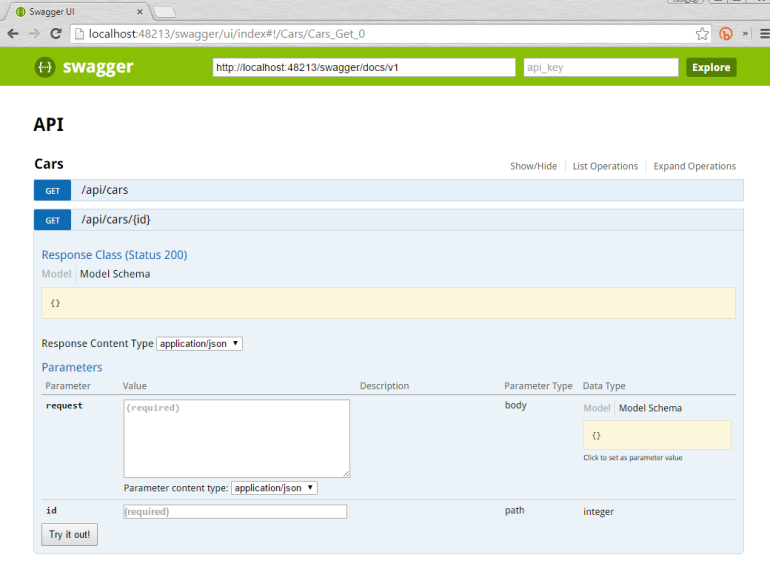 View all posts by Sergey Tihon

Going its own way with F#. Open source enthusiast. Microsoft F# MVP. Husband. Employed by EPAM Systems. Tweets are my own.